However, the general view is still that when an increase in rates does eventually happen, it will hit the economy and the economic mood with a force that hasn’t been seen for many years. Rates in the UK have not actually risen since May 2007, which means many borrowers and savers don’t actually know,or have forgotten, what it feels like.

In many ways this could be a good thing as it means it would only require a small rate rise to have a meaningful impact on the economy. Rate rises are, as the Chair of the Federal Reserve William Martin used to say, about taking away the punch bowl just as the party is getting started then this change in direction may well be enough to send everyone home early without the enormous hangover we experienced after the millennium credit boom.

I’m not so sure about all this.

When you look at what has been happening in practice, rates have been rising for some time.

Interest rates on their own are an interesting indicator of the state of the economy, but in reality nominal interest rates are meaningless. The only rates worth looking at are real rates of interest; that is rates after the effects of inflation.

For savers, a high rate of interest (say 10%) is of little value if inflation is running at 12%. The returns in your cash fund are simply losing 2% of their value every year. The inflation effect is one of the many reasons why the concept of cash being a “safe,”capital guaranteed investment is not always the reality. On the other hand, index linked government backed bonds do ensure your capital keeps pace with inflation.

Similarly if you are a borrower, a 10% interest rate is not so expensive in reality if inflation is reducing the real value of our outstanding debt by 12% a year.

We need to get real about interest rates. Since May 2009 when the base rate dropped to its current level of 0.5%, real interest rates in the UK have been anything but stable. To give the data some stability I’ve simply taken the average CPI rate over each six month period and then deducted that from the base rate. 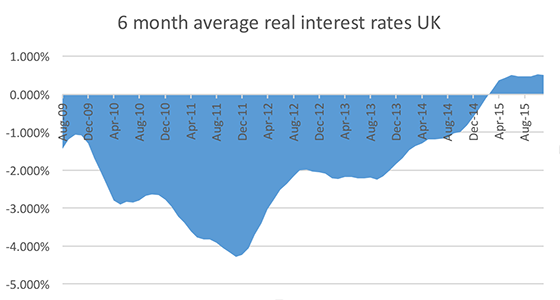 The results show quite dramatically that real interest rates have actually been rising from their low point at the end of 2011 and have remarkably turned positive since April 2015. This means that savers are actually making money on their cash savings at the moment. This is largely due to inflation effectively falling to zero. Meanwhile borrowers have to pay more in real terms for their credit. That’s something that hasn’t happened for some time.

In many ways the increases in real interest rates over the first 8 months of 2012, effectively a real rate rise of 2%, had a far greater impact on the economy than a 0.5% rise in base rate would at the moment.

This doesn’t detract from the fact that the money illusion and the psychological signalling of a nominal increase in interest rates will have an impact on consumer, savers and borrowers alike. However let’s not kid ourselves; real interest rates have been rising for some time and therefore, as Mark Carney has finally admitted this week, the need for substantive nominal rises will be limited as long as inflation remains subdued.