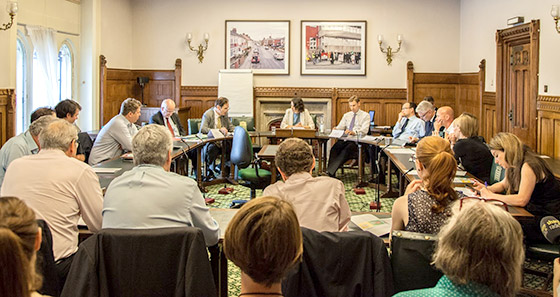 “Economically prosperous” and “safe” or an “anti-democratic” “protectionist racket”?

These were the candid descriptions of the European Union being flung about a packed committee room 17, high in the House of Commons during this week’s Scottish Friendly Brexit debate.

Impassioned Parliamentarians locked horns for 60 minutes over the question of whether a vote to leave on June 23rd would have a positive or negative effect on savings.

Conservative MP Chris Philp, a member of the Treasury Select Committee, lined up with Labour-Co-op MP Gareth Thomas, who is also chair of the Co-op Party, to make the case for Remain. Arguing for Brexit were the equally strident Conservative Peer Lord (Howard) Flight and Labour MP Kelvyn Hopkins.

Lord Flight opened by stressing the need for more savings with Brexit providing a golden opportunity. “As a result of leaving what is, in effect, a protectionist racket the cost of food and many other things will go down, so people’s disposable income and living standards should increase.”

Chris Philp returned fire, citing a series of statistics to support the Remain case, including that 44% of British exports are headed for the EU. On the trade deficit, he predicted things would only get worse.

With concerns that Brexit would cause foreign direct investment to crash increasing the probability of a run on the currency, Philp concluded that for the sake of the economy he is a “reluctant Remainer”.

Debate chair Julia Rampen, deputy editor of Mirror Money Online, brought in Kelvin Hopkins, who wasted no time in sticking the boot into the EU.

“Anti-democratic, anti-socialist and a failing economy”, he said. “We’ve seen wages as a proportion of GDP falling very substantially in recent years and all of this is about trying to drive up profits because profits are seemingly the only way to drive investment. That approach to economic management, or mismanagement, has been failing for a long time and we’ve got to reverse that.”

Closing the debate for Remain, Gareth Thomas said: “If you’re a saver and a patriot – and most savers are patriots – it is actually in our interests to be in the European Union. It’s about the type of country we want going forward. If we want a safe, secure, economically prosperous country that is outward looking, that wants to give the next generation the chance to prosper, to study abroad, work abroad, then continuing membership of the European Union is essential for Britain’s interests.”

Underpinning proceedings were the new findings of Scottish Friendly’s regular Disposable Income Index. Neil Lovatt, Scottish Friendly’s sales and marketing director, outlined how Britons were feeling about the referendum – half of households (51.6%) are worried, with young people aged 18-24 most fearful about the impact of Brexit on their family’s finances.

More information about the index can be found at Scottish Friendly’s new interactive Insights Hub.