Beautiful Autumn colours have arrived in Scotland, so what better time to visit Scottish Borders, East Lothian and Midlothian with one of the UK’s best-loved authors David Almond.

To celebrate David’s tour, we are giving away two signed and dedicated copies of his books.

To be in with a chance of winning simply answer the question below:

On which story from Greek Mythology is A Song for Ella Gray based:

The closing date is Wednesday 2 November. To enter please add your answer as a comment below along with your name, who you would like the book dedicated to and email address.

Growing up in northeastern England has been a constant source of inspirations for David’s stories and continues to be. David wrote many books for adults before writing is first novel for children, Skellig, which received huge acclaim, winning a Carnegie Medal. David’s event will discuss how stories can be grounded in the ordinary world around us and will show how you can use the ordinary world and childhood memories to access your creativity and imagination. It is sure to be an inspirational event. 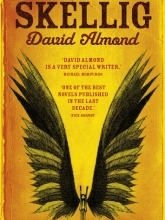 Michael has just moved with his parents and baby sister into an old, derelict house. Shortly after, he discovers Skellig, a strange, extraordinary though pale and filthy being lying in the same rickety, old garage his parents had warned him to stay away from.

While his parents worry about the critically ill newborn, Michael, unable to help his baby sister, nurtures his new, fragile friend instead. When they lift his body, the children discover what appears to be a pair of wings growing from his shoulder blades. The strange man in the garage turns out to be a cross between a bird and an angel. Once his health and magical powers are restored, he returns Michael’s kindness and gives his baby sisters a new chance to live.

A Song for Ella Gray 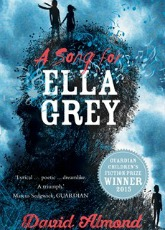 Taking the story of Orpheus and Eurydice from Ancient Greece and retelling it in modern day Tyneside with teenagers takes this ancient myth and turns it into a worthy story in its own right, lyrical and poetic in its prose.

Claire is Ella Grey’s best friend. She’s there when the whirlwind arrives on the scene: catapulted into a North East landscape of gutted shipyards; of high arched bridges and ancient collapsed mines. She witnesses a love so dramatic it is as if her best friend has been captured and taken from her. But the loss of her friend to the arms of Orpheus is nothing compared to the loss she feels when Ella is taken from the world. This is her story – as she bears witness to a love so complete; so sure, that not even death can prove final.