Who shall be crowned our pro #SuperSaver this week?

Hello there my brilliant goalkeeping fans! I hope that you all had a marvellous Hallowe’en! Last weekend saw some frighteningly enthralling games!

Last week, we predicted that the next #SuperSaver would be the hurricane of a goalkeeper, Hugo Lloris. Lloris has really made a name for himself in the last two years, becoming one of the world’s best! Despite coming in joint top of the clean sheets table, he didn’t have the best week, conceding a goal from only one shot. Lloris really did let us down! 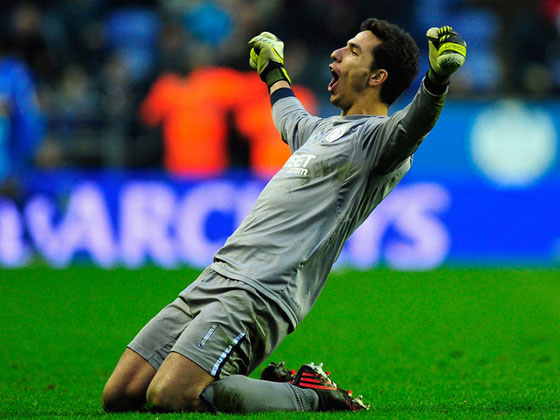 So instead, our awesome award this week goes to a magician between the posts, to a man who was born wearing gloves… Yes, you guessed it, the award goes to the Everton number one, Joel Robles. Robles put on a show-stopping performance this week with some terrific goalkeeping gymnastics. Everton was on the receiving end of 13 shots on goal, that’s more than one every 10 minutes; however, the gallant Robles from Spain conceded a total of zero goals.

Robles started his professional career at Atlético Madrid, and has also played for the under-21 national side! He looks like a very exciting player, and is definitely rising up the ranks – you heard it here first.

After letting go of the top spot that he held last week, Hugo Lloris has moved down to 4th position. Petr Čech has moved up, jumping into second place in a tie with David de Gea. So, that leaves us with one player with potential for that top spot, and that’s Thibaut Courtois of Chelsea! The stunning performances put on by Courtois puts him at the top of the table, thus making him our ‘most clean sheets’ award winner this week! Well done, you super saver!

Best save of the week

Our best save of the week goes to 23-year-old Loris Karius, Liverpool’s first choice goalkeeper. Liverpool played Crystal Palace on Saturday in a game that was hard fought and could have gone either way. Karius made a miraculous save against the skilful Christian Benteke, a former Liverpool player. Karius’s performance meant that Liverpool gained three points and held their position at joint top of the Premier League table. The young goalkeeper has really proved the pundits wrong this season, demonstrating that age is but a number!

With another great weekend of top class football just around the corner, stay alert for our next post where we will be predicting our ninth #SuperSaver!