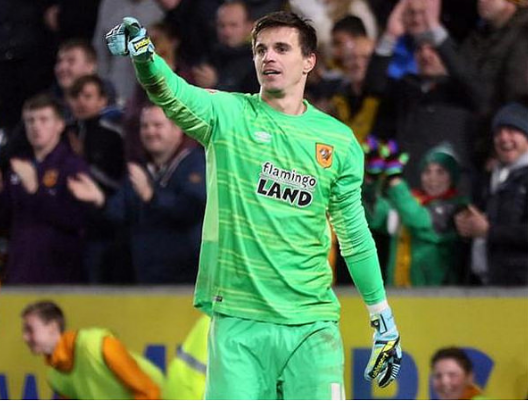 I’m still full of energy and excitement from the weekend – Saturday was an especially fantastic day for goalkeepers! Only four goals were conceded in all five games, which is phenomenal! Wins for Chelsea and Spurs keeps the bid to win the Premier League at a two-horse race and I can’t wait to see who brings the title home.

The North London derby saw Tottenham come out on top with two goals in three minutes from Dele Alli and Harry Kane. Petr Čech had a great game and was arguably one of Arsenal’s best performers. He made several decent saves and without his contribution Tottenham could have gone on to score more.

Hugo Lloris, on the other hand, was barely worked in between the sticks, with only a few bits of routine work to carry out. Nonetheless, he will be pleased to keep a clean sheet and be at the top of the table with a record of 15 so far this season.

I very much enjoyed the Hull vs Sunderland match and one of my favourite keepers, Eldin Jakupović, had an awesome 90 minutes and will steal the headlines.

His penalty save gave Hull much needed survival hopes and it also relegated Sunderland! If the Tigers are to avoid relegation this season they will point to Jakupović’s last minute penalty save as a decisive moment in their Premier League survival battle.

Chelsea inch ever closer after beating Everton 3-0. On paper, it was the hardest game left for Antonio Conte’s men and it was a relatively tight game until Pedro broke the deadlock in the second half. Chelsea keep their first clean sheet in 12 league games and Thibaut Courtois’s amazing ability wasn’t really tested other than his fine stop from Enner Valencia’s dangerous cross.

At Old Trafford on Sunday, Manchester United were held to a draw against Swansea. Gylfi Sigurðsson scored a brilliant free kick leaving David de Gea rooted to the spot and helpless. Swansea will most likely be confident going into their three remaining fixtures and if they can replicate performances like this then they have a great chance of avoiding Championship football next year.

David de Gea will be disappointed with his performance – his distribution could have been much better. Łukasz Fabiański on the other hand was unfortunate not to keep a clean sheet as Rashford clearly dived to win his side a penalty.

With the bank holiday Monday shortening up the week, more games are just around the corner, including Arsenal vs Man United which should be a good one! Until next time folks!