Memories are made of this! 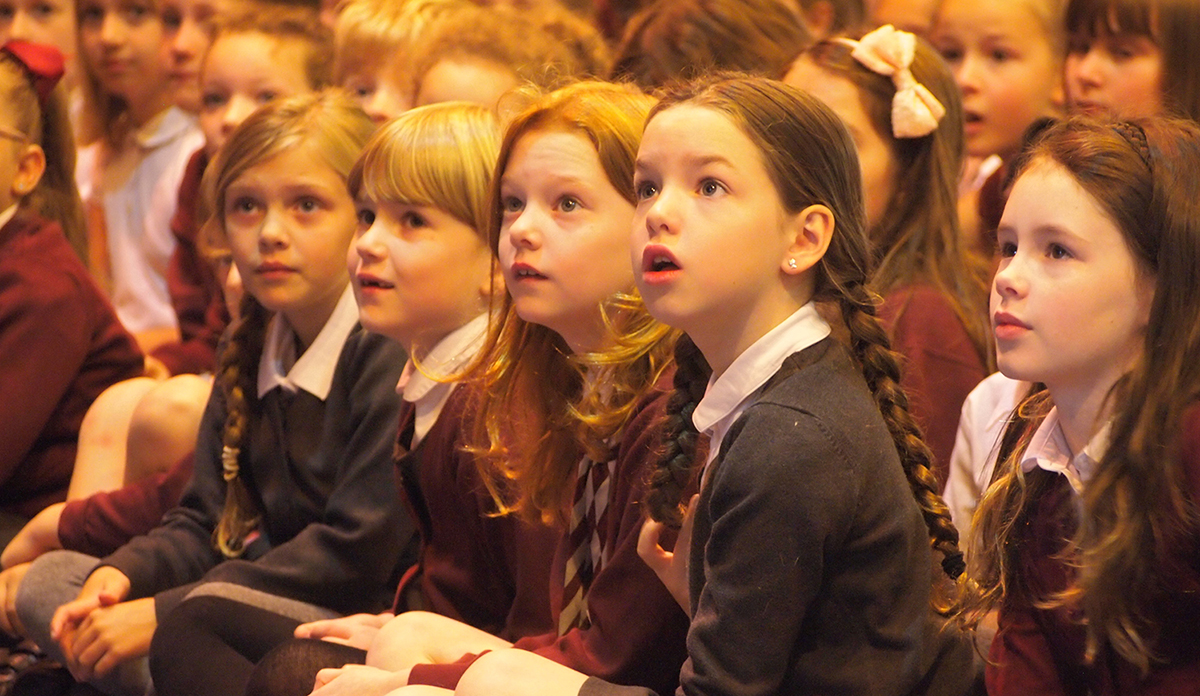 If you ever get the opportunity to become involved with the Scottish Friendly Children’s Book Tour grab it with both hands and don’t let go!  This collaboration with the Scottish Book Trust is, to paraphrase the Muppets, not only sensational but also inspirational and celebrational! Bringing authors to live audiences of children, getting them excited and enthused about both reading and writing, encouraging them to let their imaginations soar and leaving a lasting impact on both teachers and children is an experience not to be missed. Sounds like I’m over selling? Well, no! I’ve been really fortunate to have been involved in two very different events and can honestly say that the impact on young readers has to be seen to be believed.

My first encounter with the Tour was in 2012. Julia Donaldson was appearing in Stirling and I had a P4 class at the time. Although I knew the value of Julia’s work I still felt that I was taking a bit of a gamble with this particular class as it had a small number of boys who were reluctant to engage with reading – but were very big on street cred.  Having watched Julia previously on Authors Live I was sure if I could just persuade this wee group to give her a chance to work her magic they might just realise the power of picture, rhyme and story for themselves. I needn’t have worried. As we filed into the auditorium at the MacRobert Centre the buzz of excitement was tangible: the children were behaving like they were a teenage audience from the 1960s going to their first Beatles gig. This was an author they had all heard of and they had read her books. Even their parents knew who she was! All the chatter in my class turned to what their favourite Julia Donaldson book was, and they began quoting bits to each other in the queue. I was thrilled!

We eventually took our seats (although the children wanted to get as close to the stage as possible by standing and leaning forward) and Julia and her husband appeared.  My class were spellbound when she read to them, joined in when she sang to them and were almost uncontainable when she asked for volunteers to help her turn What The Ladybird Heard into a short drama.  And when Julia read The Gruffalo in Scots, my P4 turned as one to me – grinning and pointing as if this famous author had read the Scots translation just for benefit of their Scots championing teacher. She happily and seriously answered questions about her writing process and my class listened to every word with a level of concentration I could only envy.

The children queued up to have their books signed at the end, and what had been initially intended as dedications for wee brothers or sisters morphed into personal inscriptions for my street cred crew. Julia had won them over, and the excitement of the day was brought back with them to home and school. They spoke about how to become authors, treasured their books and shared Julia’s stories with the younger children in school. Parents commented on how much the children had enjoyed the event, how they were reading to their siblings or writing their own picture books at home. A positive reading ethos blossomed in that class, proving that by making reading an event attitudes and culture could be transformed.

Fast forward to 2017, and a very different Scottish Friendly Children’s Book Tour event.  This time Ciaran Murtagh came to our school to work with our P4 – P7 children. Side splittingly entertaining, he had the teachers in the palm of his hand! Through a fast paced, humour filled workshop that demanded 100% attention and audience participation, Ciaran demonstrated how to get your imagination working when faced with a blank sheet of paper and asked to “write a story”. He was able to talk with experience about the writing process, and had the children competing to help him write a story on the spot. He was peppered with questions throughout, and his answers were thoroughly digested and examined in classes after the event. Children sent him follow up interview questions via his website as well as reviews of his books – which he replied to graciously, good naturedly and promptly which catapulted him to writing hero status amongst the P6s and P7s. Children who found writing a challenge now found a purpose and audience, would write first and edit later, would experiment and discard or redraft. His visit is still talked about in class today – and I don’t know if Ciaran realises it, but he has been adopted as ‘our’ author with children waiting in anticipation for his next book.

The impact of the Scottish Friendly Children’s Book Tour really has to be experienced to be believed. Young readers who have never met an author before becoming inspired to write for themselves, to try new genres, to have an adult other than their teacher talk with them about imagination and the writing process – a truly celebratory approach to developing a positive reading culture in schools. So as I said at the beginning, if you ever get the opportunity to become involved with the Scottish Friendly Children’s Book Tour grab it with both hands and don’t let go!